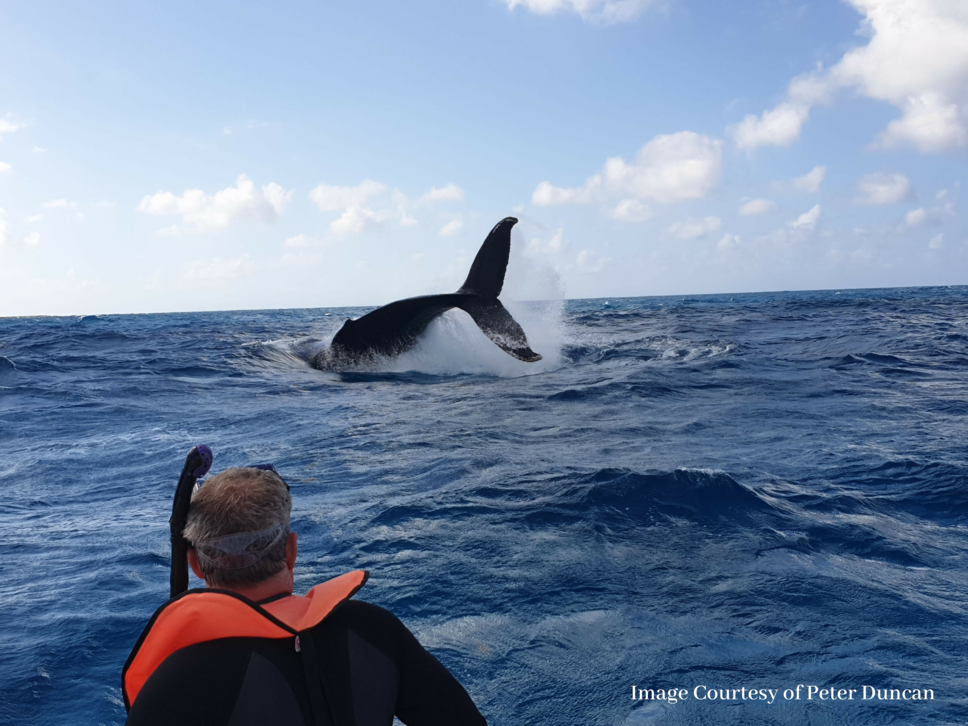 Steve celebrates his 50th birthday with a flip of the tail from his new friend.

Salt Cay is one of the few places in the world where you can actually get in the water and snorkel with the humpbacks. Salt Cay is considered “Whale Headquarters” from January to March each year. Seeing one of these majestic creatures in person, whether from the boat or in the water, is the thrill of a lifetime!

Our Salt Cay Divers whale watching excursions last approximately 3-hrs. Our staff is trained to provide education about the humpback whales as well as allowing you the opportunity to see and learn about whale behavior. If the weather and the whales allow it, we gently slide into the water and snorkel with the whales. It is a truly unforgettable experience!

Salt Cay is directly in front of Columbus Passage where the Atlantic Humpbacks migrate to the Silver Banks, between the Turks and Caicos Islands and the Dominican Republic, to mate and calve. When scuba diving and snorkeling you can hear the mesmerizing songs from the Humpbacks. The beautiful songs assist them with their navigation. Snorkeling with these huge whales during frequent “in-water encounters” is truly an awe inspiring experience. You can get an excellent view from the boat if you don’t want to get in the water with them.

Salt Cay is one of the last places in the world where you can actually swim with these magnificent creatures. We cannot guarantee the whales will be passing by on any given day, but we’ll do everything to make sure you have an adventuresome holiday.

Trips have a 4 person minimum or are billed at the price equivalent. | Trips are approximately 3 hours in duration. | All prices are subject to an additional 12% government imposed tax.

Will we see whales?

There is definitely a possibility that you will encounter whales on your trip. You will be traveling into one of the best humpback whale viewing areas in the world with our highly experienced guides. However, we cannot control the whales behavior anymore than we can control the weather and so the frequency of sightings is ultimately determined by the whales. Although it can be a very exciting occasion, out of respect for the animals all whale encounters will adhere to the current regulations protecting this endangered species.

What to know for your Salt Cay Divers whale watching adventure 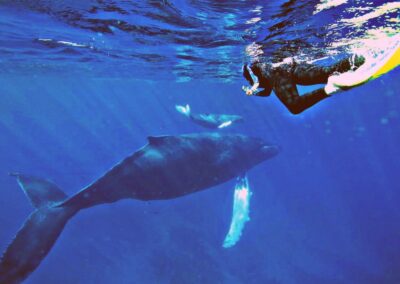 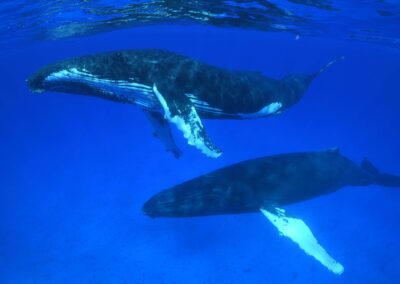 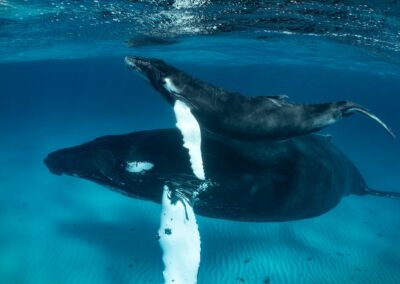 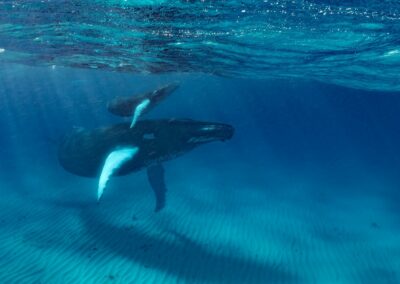 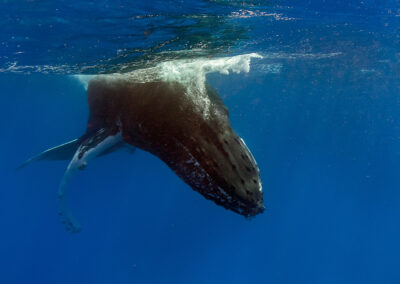 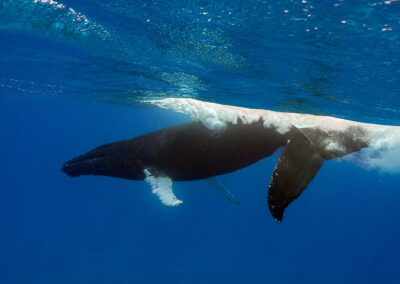 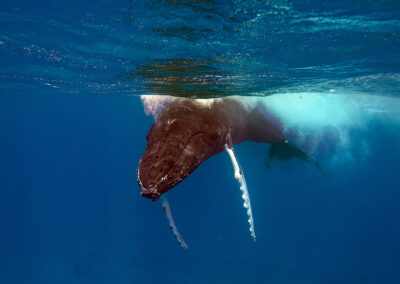 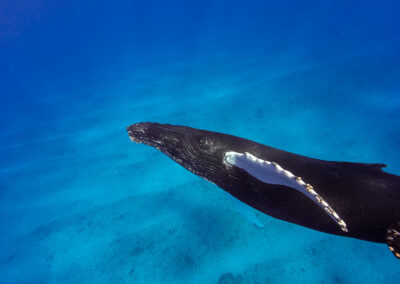 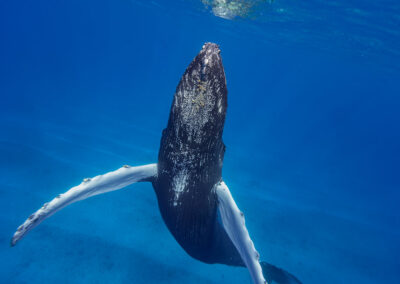 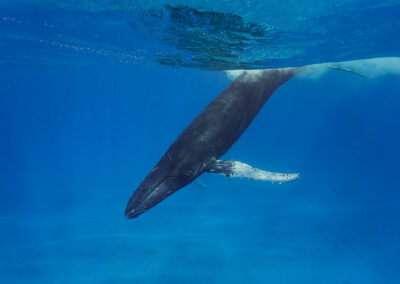 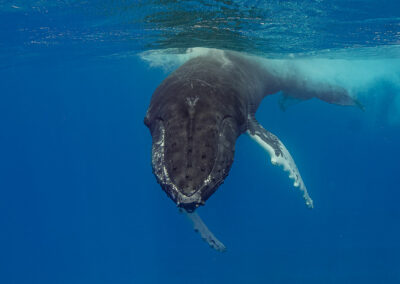 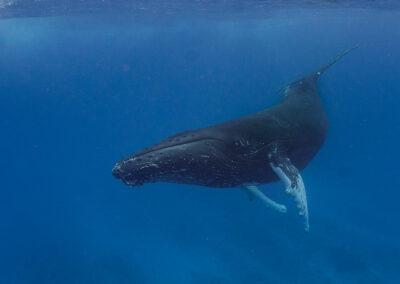 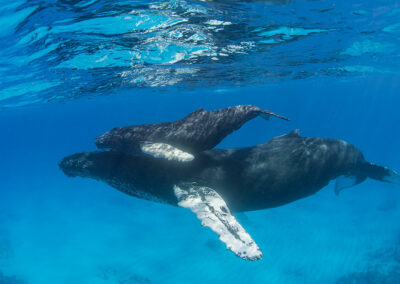 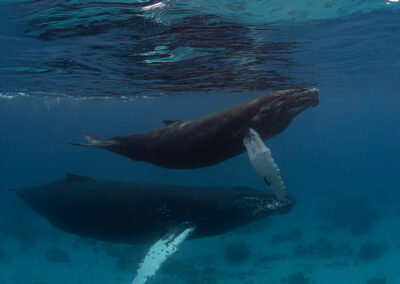 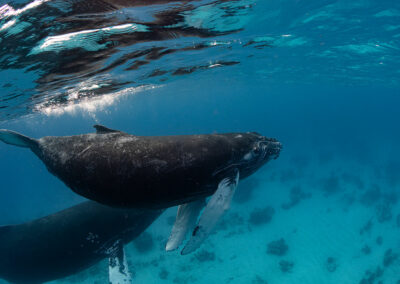 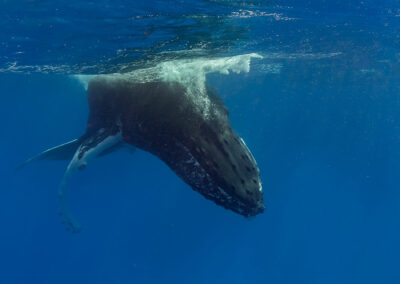 More about our Humpback Whales:

“As Humpback whales travel their seasonal migrations, whale watchers and scientists are provided excellent opportunities to observe these giants in action. Regularly swimming from their northern summer feeding grounds to southern breeding grounds, Humpbacks move slowly and jump almost fully out of the water, displaying to onlookers the full magnificence of their often 15-meter (50-foot) bodies. Unfortunately, it is this same predictability and playfulness that has made humpbacks easy targets for mass slaughter.

The main reason for the lengthy migration from the polar waters, where the whales feed on small fish and euphausiids (krill), to the tropical surroundings is to breed and calve in the winter months (Jan.-May). The whales don’t arrive all at once in huge masses but flow in and out. Humpbacks prefer breeding waters of 75-degrees F, quiet bays and leeward sides of exposed reefs with a depth of 600 feet (100 fathoms) or less, and large banks wider than 2-3 miles.

After a gestation period of 10-12 months, the newborn calf is precocial – fully functional and able to move about on its own. The Humpback calf at birth, which stretches about 12 feet in length and weighs nearly two tons, feeds on the mother’s high-protein milk (100-130 gallons per day) to grow approximately one foot per month on its way to doubling in overall length in one year. Since the calf is usually born in shallow, inshore areas free from predators, the mother stays close to its calf nudging and coaxing it to keep the curious youngster close by and for bonding reasons. A third escort whale, usually a sexually-active male, accompanies the mother and calf for less than a day.

Whale watchers can double their excitement when the mothers and calves are commonly sighted together in shallow waters immediately after birth and then about two to three miles from shore a week later. The amazing thing about these giant mammals is they keep their personal life very personal. Not many humans have witnessed or recorded (accurately) the actual birth of a humpback whale or for that matter – two whales mating. It’s hard to believe these 45-ft., 40-ton creatures can “hide” anything, but that’s what makes the nature of whales so fascinating.” 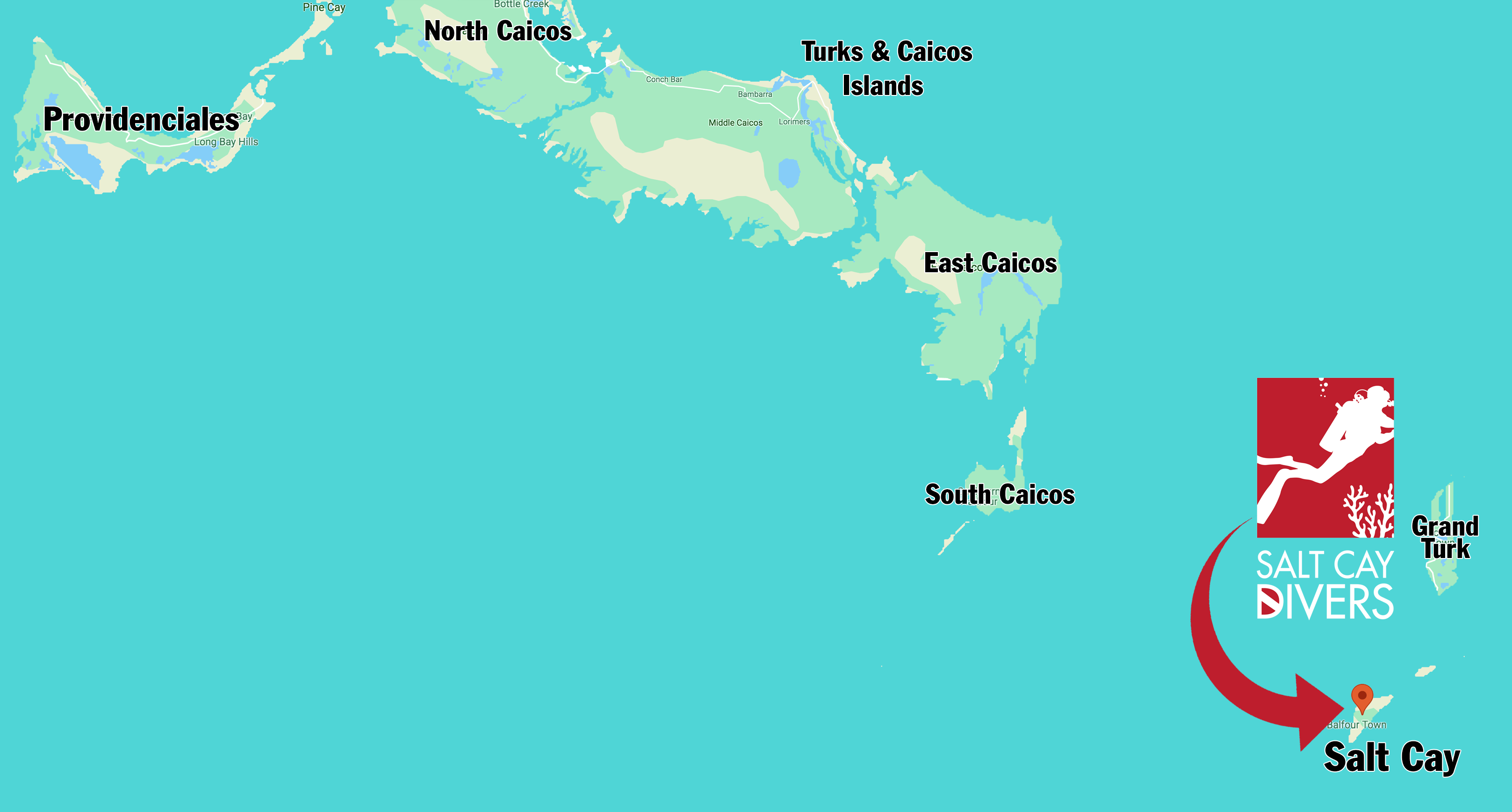